Welcome to the website of author Linda S. Rice, best known for her time-travel romance series, “The Necklace.”

What if you could travel back into the past to meet the man of your dreams at a time when it would be possible for him to fall in love with you?

Susan does just that when she meets two ladies from Haiti while on a cruise with her childhood friend, Lynn. Mika, the elderly of the two ladies, claims she can see into Susan’s soul and that if she sends her back in time to meet James, the man who Susan has dreamed of for fifty years, Susan will learn something important about him and about herself.

Susan travels back to the year 1962 in her 17-year-old body where she meets James, age 20, a member of a band that will one day become the most famous band of all time. Susan is stunned and delighted when James is instantly drawn to her, inviting her out for tea and offering to walk her back to her hotel after the band quits playing for the night.

But much to her dismay, Susan’s 17-year-old hormones begin to play havoc with her 62-year-old brain, tempting her towards a relationship with James that she’s not really certain she wants.

Will James end up being the paragon Susan’s always thought him to be? Or, will she learn that sometimes when a dream comes true, that it’s not quite what you expected? 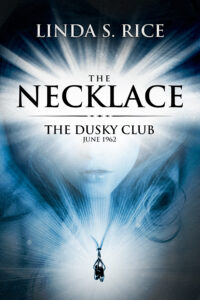 Available Now! A continuation of the first “Necklace” series, taking James and Susan over 200 years back in time to 1815 Regency England.

After crossing the rainbow bridge in 2037…and hoping to spend a new life together without the strife and heartbreak they most recently experienced…James and Susan agree to travel back in time to 1815 Regency England when Susan’s magical necklace was first created.

But after Susan enters the body of Lady Susanna Sheffield, daughter of the Duke and Duchess of Bradford and James becomes Lord James Lynton, Viscount Hollingsworth, they discover, much to their dismay, that the difference in their social status is only one obstacle to overcome.

Susan is still the independent, stubborn, and impetuous female she was back in the future, and James has not lost his arrogant, bossy, and controlling nature despite their vow to change.

And, in addition to the Duchess deciding a mere Viscount isn’t good enough for her daughter, a wealthy Italian Count decides he wants Lady Susanna for his Contessa and commissions a magical necklace from Alchemist Dr. Thaddeus Holloran that will bind her to him for life.

Will the Count succeed in placing the magical necklace around Susan’s neck? Will the Duchess be able to keep James and Susan apart?

But most important of all, will this fiery couple be able to adapt to the strict rules and conflicting morals of an era over 200 years back in time without creating new discord between them?

After the whirlwind of her first Season, her come-out ball, and surprise betrothal to Viscount Lord James Lynton, Lady Susanna returns to Bradford Park with her mother. During her brief stay at home, she meets her future mother-in-law, Lady Emily, before being unceremoniously whisked off to Brighton.

The cream of the ton follows the Prince Regent there, curious about his royal guests, a Persian Price, and two Danish princesses. Will Susan’s interference in the betrothal of Prince Zayan and Princess Petrina result in a royal scandal?

To Susan and James’s consternation, Lord Justin Pelman, still determined to break their engagement and marry the rich heiress himself, also follows the nobility to Brighton to plot with Susan’s mother, who favors Lord Pelman over the Viscount. When the plot begins to falter, Justin enacts desperate means to obtain his goal.

Susan experiences a shock when her father, the Duke of Bradford, introduces her to Nigel and Caleb, her two half-brothers from Lady Harrington. But she is even more shocked when she discovers Caleb in a love affair with Sir William Campbell, a brilliant musician, recently returned from Vienna, knowing the penalty for such a relationship could mean death.

Will Susan and James be able to overcome the machinations of Lord Pelman and the Duchess to break their betrothal? But most importantly, will they be able to endure the one-year waiting period imposed by the Duke before they may wed?

Young and naïve, Brianna Campbell has dreams of becoming a professional harpist, and when she’s accepted by a prestigious music academy in Edinburgh, Scotland after high school graduation, she leaves the family farm in Ohio with high hopes.

Once there, however, she becomes the target of Malcolm McGarity, a famous rock musician who has returned to his hometown of Edinburgh, worn out and bored with his lifestyle, nights of partying, and loose women. Once he sets his sights on the beautiful and innocent harp student, he determines to have her despite the warning of his longtime friend and fellow musician, Gerry Ferguson, to keep away.

Gerry, who had lesser success as a musician and who has left the music scene, works at the Academy where his sister, Fiona, is a student. It doesn’t take long before Gerry falls in love with Brianna and warns her away from his narcissistic and mentally unstable friend, believing he will only destroy her as he has so many others.

Who will Brianna choose?

The wealthy, charming, and devastatingly attractive Malcolm, who woos her with red roses and fairytale promises…or kind and caring Gerry who has nothing more to offer her than his heart?